The final stages of the Fight Week strategy include the fluid manipulation, or the ‘cut’ as most fighters refer to it as. This is potentially the most difficult and harmful practice a fighter can complete. For Kai, this process runs extremely smooth, here’s why.

As I stated in the previous article, we used a number of strategies during the week to artificially reduce Kai’s weight. By lowering fibre, reducing salt, depleting some glycogen and water loading we were able to wake up the morning of the weigh ins only having to sweat off 2.5% of his body weight. A marginal amount considering many fighters dehydrate between 5-10% the morning of weigh ins.

For Kai, we started our final cut just 90 minutes prior to the official weigh ins. We start by running a warm bath. The key word here is warm, because that is all it has to be. Too often fighters turn themselves in to soup by getting in to a boiling hot bath. Despite the lack of literature in this area, the following is what guides my practice in regard to bathing.

The goal of the bath is to get the core temperature hot enough to induce sweating, our body’s cooling mechanism. When your core temperature increases, your sympathetic nervous system stimulates your eccrine sweat glands to secrete water to the skin. This process allows the transfer of heat from your body to your skin and then into the air, thus cooling your core body. A water temperature of 38 degrees Celsius will be adequate for the majority of fighters to adequately achieve this.

Kai spends approximately 10 minutes in the bath, and this is more than adequate to induce a good rate of sweating. This increased rate of sweating, which can be determined by how quickly sweat appears on the brow after being wiped off, is a good indicator that core body temperature has increased enough for the desired outcome. We then put on a sauna suit and go in to what is called ‘the wrap’. 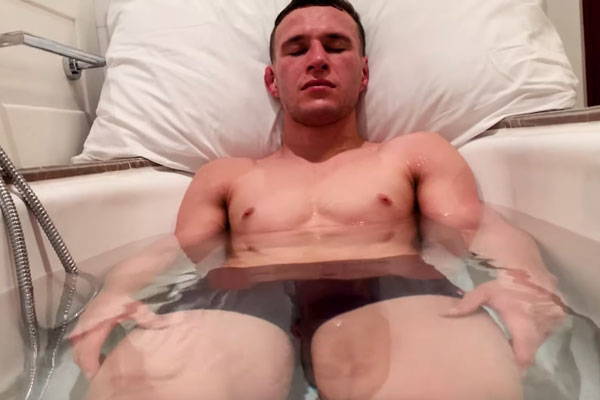 The wrap is essentially a big heat burrito of towels and blankets. We put on a sauna suit and then wrap up in about 8 towels and place a thick blanket on top. All this does is trap the heat inside the suit and slows the transfer of heat from the body to the air. Essentially, it keeps the cooling mechanism (sweating) going for longer than if you were to just lay on the ground with nothing on.

Your body will eventually bring its core temperature back down and the sweating will stop. This point usually occurs between 25-30 minutes and this is when we officially complete a ‘round’. These numbers will vary between individuals depending on hydration status, body weight, and fat free mass. You can see a video outlining this process on EMG Access episode 3

Kai and I did a total of two rounds and we were able to comfortably lose the remaining 2.5% of his body weight. The entire process took under the 90 minutes and we routinely checked his blood pressure and heart rate at different stages during the process to ensure he would not experience orthostatic hypotension while moving.

The goal of the post weigh in period is to rehydrate with fluid and electrolytes and replenish glycogen stores by consuming an adequate amount of carbs. Many fighters just go out and consume whatever they want or have been craving. This is not a good idea because your gut has become accustom to the foods you have been consuming during camp. It is much better to continue consuming low fibre foods, just in a much higher volume.

Immediately Post Weigh In – Rehydration shake containing essential electrolytes and 500ml of fluid followed by 3 more 500ml electrolyte and carbohydrate drinks consumed 15 minutes apart. He would then continue to rehydrate a volume of fluid that equalled the difference between his weigh in weight and the weight he was at the beginning of fight week.

Food – After consuming his rehydration drinks and then getting the all clear that it was sitting fine in his stomach, we start consuming food. Kai would have approximately 33 hours between weigh ins and fight night, which is plenty of time to adequately fuel up.

The Morning of the Fight – Kai with food familiar to his gut and consumes the same meals that he normally has before his sparring sessions including; Fresh Greek yoghurt with fresh fruit and muesli and a Rice and Chicken bowl for lunch. He then continues to snack on Fresh Fruit and has his final light meal before heading to the stadium (4 hours prior to scheduled fight time) where he will continue to snack on fruit and have fluids.

The post weigh in period is critical for the performance of the fighter and there are two main principles that need to be followed;

Many fighters get by not having specific fight week and post weigh in strategies, but they are a simple way to dramatically increase the chance of getting your best performance when you step in to the cage. If this is something you feel like you can improve on, seek the help of an adequately trained Combat Sports Dietitian to determine strategies specific to your needs.

What To Look For In A Good Pair Of MMA Gloves

How To Train Consistently Without Getting Hurt